Somnath shrine, an experience of serenity

During an argument about who holds higher authority over the universe, Brahma (the creator) and Vishnu (the operator) witnessed the fiery incarnation of Lord Shiva. In an urge to find the start and the end of this infinite radiant light, piercing through the three worlds, both the gods are believed to have run towards its two extremes. While this futile attempt by the two led to Brahma losing the right to being worshipped, what remained was the legacy of Shiva’s supremacy, his partless reality, the jyotirlingas. Originally believed to be 64 in number, there are 12 most auspicious jyotrlingas, of which Somnath is the first one.

I, like the all of you, have no idea whether these stories were created or carried, but what I do acquiesce to is the calm and strength that both, these tales and their places of origin provide to the inner-self, once you believe in them.

India has more than 2 million Hindu temples, and the Somnath shrine is amongst the top five of the most visited temples. Located on the western coast of Gujarat, it is the first of the twelve main jyotirlinga 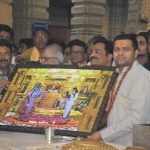 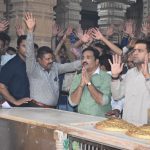 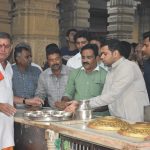 s. One of the oldest and most revered temples of India, the shrine finds its reference in the most ancient texts like Shreemad Bhagavat, Skandpuran, Shivpuran and Rig-Veda, marking its significance In the Hindu mythology.

Build on stories and survived on devotion, Somnath Temple stands testimony to united faith. Neither could its repeated vandalisation by invaders over centuries harm the architectural magnificence nor could the contemporary midas touch during its recent revamps paper over its spiritual aura.

Born and raised in the vicinity, I have developed a personal affliction to Somnath temple’s development and my devotion to Lord Shiva. This year, like almost every year, my one-month Shravan fasting ended in the visit to the sanctum sanctorum. I along with my family performed the Maha puja and received the blessings of Lord Shiva.

While I have been basking in the glory of prayers since then, I must not forget to mention how the temple’s administration is efficiently managing over 7000 devotees daily. Being part of a temple association myself (Dwarka), I understand the nitty-gritty of taking development leaps and yet keeping the holy legacies alive, and I must say that Somnath is doing a good job.

Soren Kierkegaard once said that “Prayer does not change God, but it changes him who prays” and it will not be wrong to say that my experience at the Somnath Shrine in the middle of a hurried living made me experience what I had read.