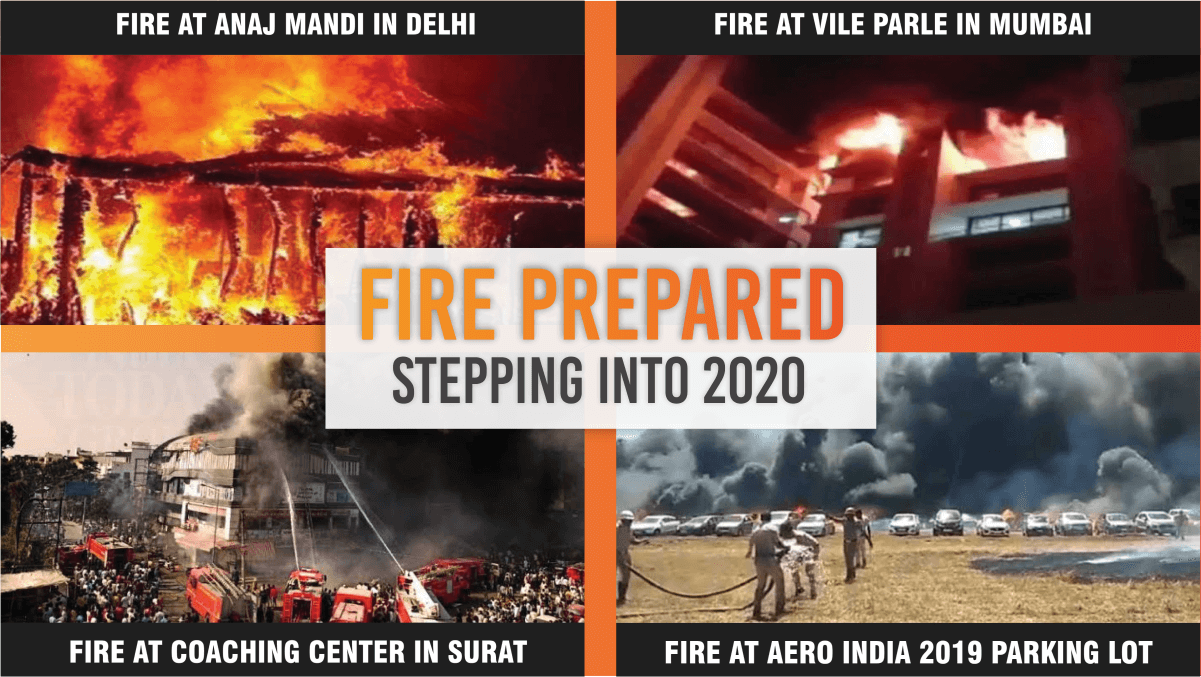 We are stepping into a new year and I have always believed that the best way to do it is by planning for the best and being prepared for the worst. 2019 was a year of many events, incidents, achievements and few disasters. On one side the country took pride in being homeland to another Nobel Laurette, on the other hand smokes of fire in Surat and Delhi ‘greyed’ the blue skies. While it is always nice to carry the memory of the good, it is very important to step ahead with the learnings from the worst.

In the recent past, several Indian cities have experienced disastrous fire incidents that have claimed many lives. Out of the many in 2019 alone, the deadliest such incident claimed 66 lives! The fire that engulfed a coaching center in Surat claimed 23 young lives. In Delhi at least 43 people died and more than 50 were injured in the fire that occurred at a factory building in Anaj Mandi. In both cases, the fire started due to short circuits and the precarious condition of the buildings then exacerbated the situation.

The often-occurring fire incidents across the country are a grim reminder of our repeated failures and perpetual state of unpreparedness when it comes to mitigating disasters. It is true that a fire cannot be predicted. But, if we have proper fire protection measures and equipment in place, then we can prevent loss of lives, serious injuries as well as severe damage to the property.

We have lost far too many lives by not being prepared or properly trained. Lives have also been lost due to illegal constructions that the authorities have somehow missed or intentionally overlooked.

Assessing the fire safety standards of an organisation or residence is an important exercise which can be accomplished by a fire safety audit, which evaluates a building for compliance with the National Building Code of India, as well as relevant Indian standards and the legislation enacted by State governments and local bodies, on fire prevention, protection and life safety measures. Municipal corporations and local bodies are responsible for providing fire services and enforcing fire safety norms. But, due to lack of resources many such services are ill equipped to provide sufficient fire safety cover.

FICCI-Pinkerton’s India Risk Survey of 2018 drew attention to the “under-equipped fire services in the country.” A study sponsored by the Union ministry of home affairs in the same year came to a similar conclusion. It found that out of the 8,550 fire stations that are needed in the country, a little more than 2,000 are in place, which is a shortage of about 65 per cent. According to the report, urban areas alone require an additional 4,200 fire stations just to meet the minimum standard for response time. The report has outlined the sad state of fire-fighting infrastructure in India and unless the shortfall is addressed, cities in India will continue to remain live tinderboxes waiting for a spark.

According to the ministry of home affairs, there is a large deficiency of fire-fighting infrastructure in 144 towns with population over 1 lakh each. Although the government in 2009-13 had given financial assistance of Rs 176 crore to streamline the fire services and supplement the modernisation efforts across states, it now seems apparent that either the funding was poorly utilised or was not enough in the first place.

Other than maintaining a proper fire-fighting infrastructure and having a proper budget to do so, another important aspect lies in building consciousness among citizens about fire safety and prevention.

One simple way of spreading awareness would be to have periodic fire safety workshops in localities, schools, and workplaces with active participation from locally elected representatives. There are many offices or high-rise buildings that have expensive and advanced fire-fighting mechanisms but hardly any person has been trained to use them. Furthermore, lack of regular maintenance of such equipment, which might be a result of insufficient knowledge, adversely affects its functionality at time of a fire.

Unless fire safety is taken seriously by authorities and citizens alike, such incidents are bound to recur more frequently. Citizens need to take an active interest in learning about fire safety and prevention, while fire safety departments need to enforce safety audits periodically and then subsequently act against erring establishments.