How Tech Companies Are Leading The Fight Against Climate Change 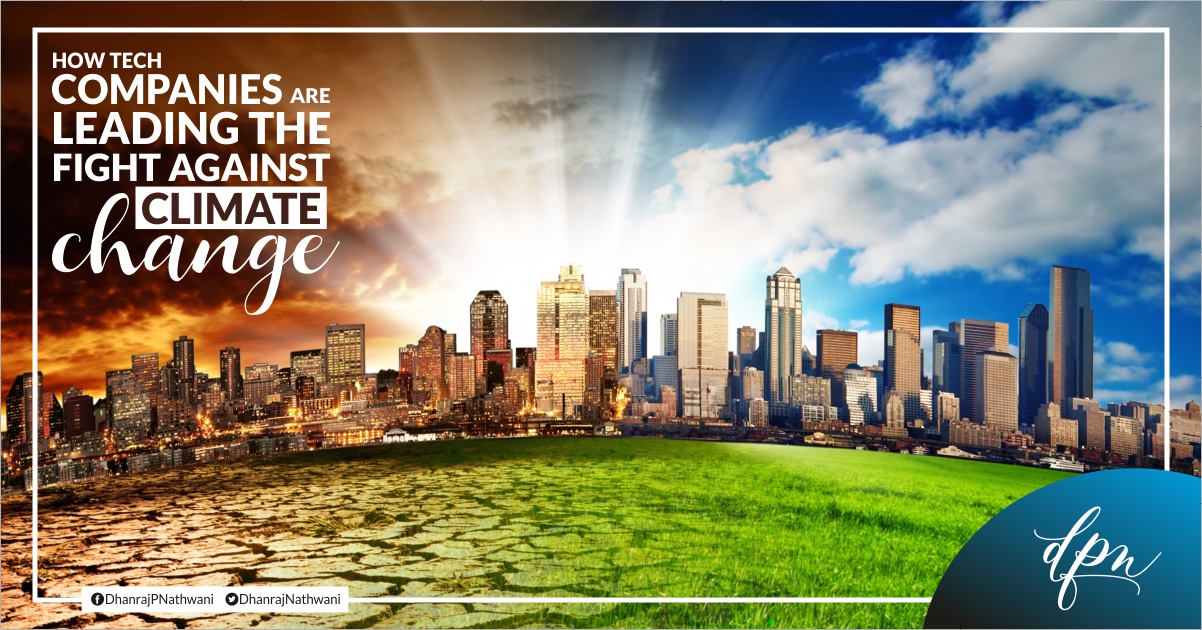 The Earth’s climate has changed throughout history. Just in the last 650,000 years there have been seven cycles of glacial advance and retreat, with the abrupt end of the last ice age about 7,000 years ago marking the beginning of the modern climate era — and of human civilization. The climate change in last five decades has been proceeding at a rate that is unprecedented over decades to millennia. It’s a reality which cannot be ignored anymore.

Climate change is not only affecting human civilization but wildlife, flora and fauna also. The entire Earth’s ecosystem is under threat today. Its impact is evident across regions and other aspects of life like human health, agriculture, food security, water supply, transportation, energy etc. Decreased air quality, extreme weathers are on a rise across Globe. Prolonged droughts, rising sea levels, melting glaciers, the list is endless. And it’s time we pay heed to the warning signals.

Politics and Policies and Politicians, all have failed miserably in their efforts to combat Climate change globally. The great majority of climate change programs, from American congressional bills to cap-and-trade economic incentive schemes to the Kyoto Protocol and other international treaties, rely on greenhouse gas emissions-reduction targets that will prove “too little, too late” by deferring strict pollution controls too far into the future. Vast discharges of greenhouse gases authorized by weak emissions-reduction programs in the next several decades virtually guarantee that the cumulative concentration of greenhouse gases in the atmosphere will keep increasing while climate change continues to grow worse.

Politicians and Policy makers are often shortsighted and focused on short-term gains rather than committed to long-term projects such as climate change mitigation. In addition, business interests, which often go against environmental issues, can heavily influence political decisions in democracies and stir political leaders away from adopting and/or implementing emission reduction policies. While climate change is a global challenge and solutions are often connected to countries’ participation in and compliance with international environmental treaties, actions that countries take in addressing climate change are similar to their actions in solving local environmental problems. All this brings us back to the most important question again, “How do we combat Climate Change?”

Technology seems to be an answer to this question. It’s true that technology itself is behind this accelerated rate in climate change, but again, today it is emerging as a savior also. With new technological innovations, we can try to reverse the damage and ensure a safer future. Wasteful energy policies, overuse of resources, water supply shortages, global climate change, and deforestation are just some of the issues experts say need to be addressed for humans to achieve sustainable living on this planet. And now Technology is providing solutions for these problems. Some examples where technology is helping us are as below:

Given how technology is rapidly shaping industries across the world, tech companies are poised to bring about a great revolution in our collective efforts to curb the rising challenges posed by climate change. Tech-giants like Facebook, Google and Twitter have come out in strength and in support of our fight against climate change and even have programs both internally and externally that aims to bring about awareness about climate change. We should take inspiration from their efforts and do our bit as well. Climate change is real and is here to stay unless we do something about it.